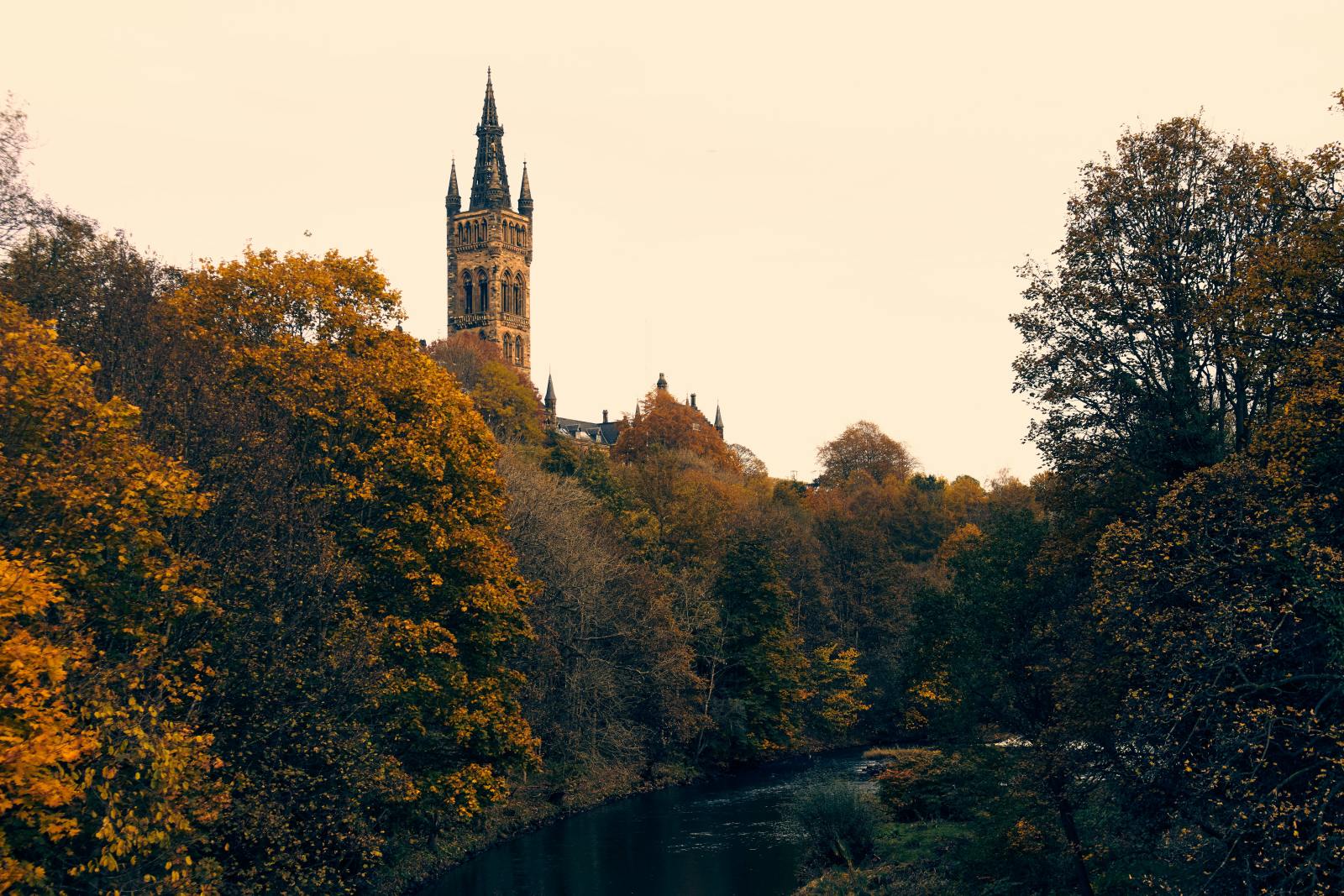 I’m a big runner, but not only that, I take a lot of satisfaction in exploring Glasgow and scheming up different running routes, so I thought I'd share a few of my favourites!

Naturally these all start and end in my neighbourhood (Partick), but you can of course join on wherever makes sense for you. The routes range from 5km (3.1 miles) to 21km (13 miles/half marathon).

My goals when creating a running route are pretty standard:

So let's get going! 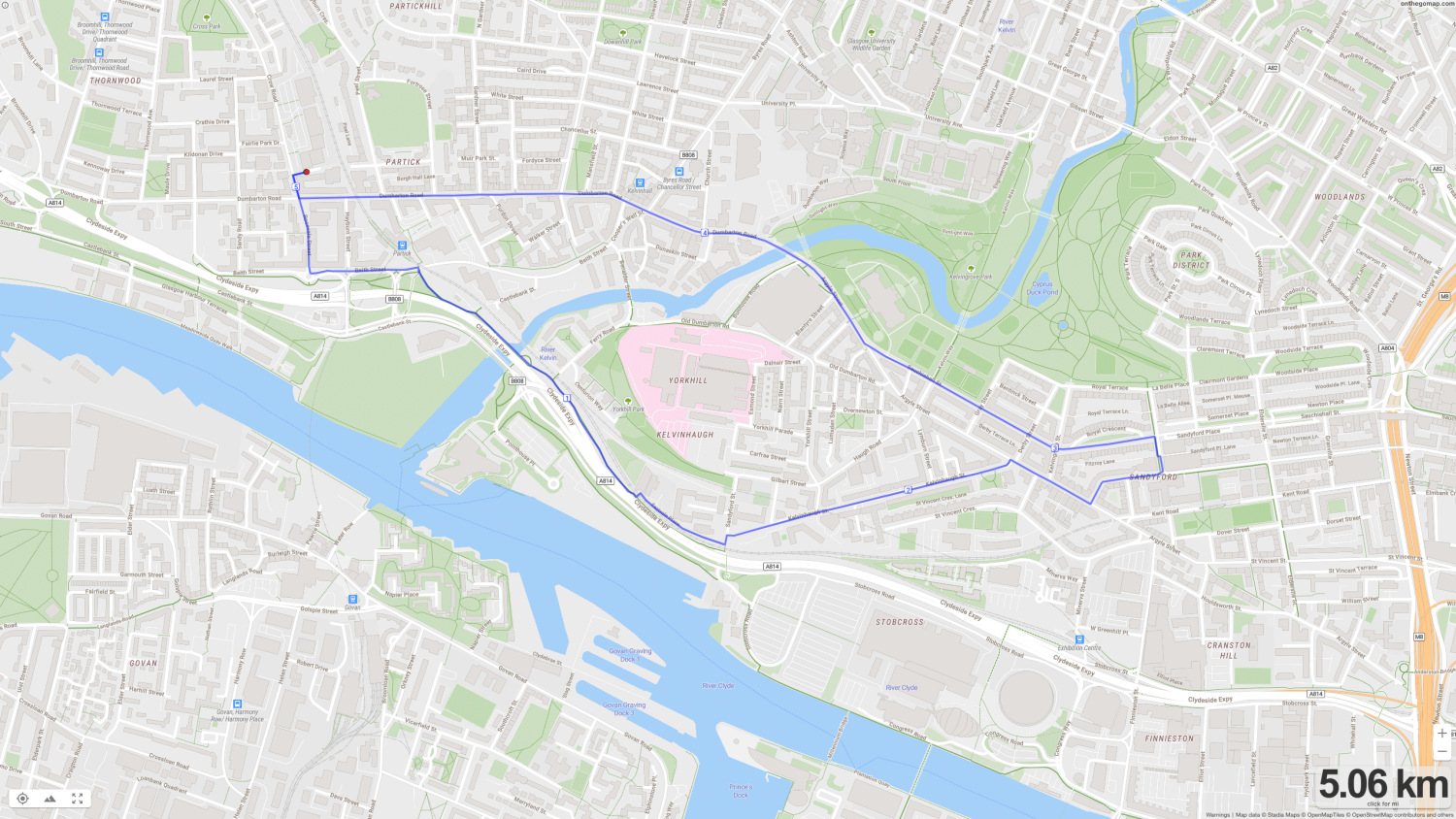 A simple little flat loop through the streets of Partick and Finnieston. Dumbarton Road and Argyle Street can be a little busy and require some stopping/weaving but a large portion of the run (along the expressway and up Kelvinhaugh Street) is quiet and easy going. 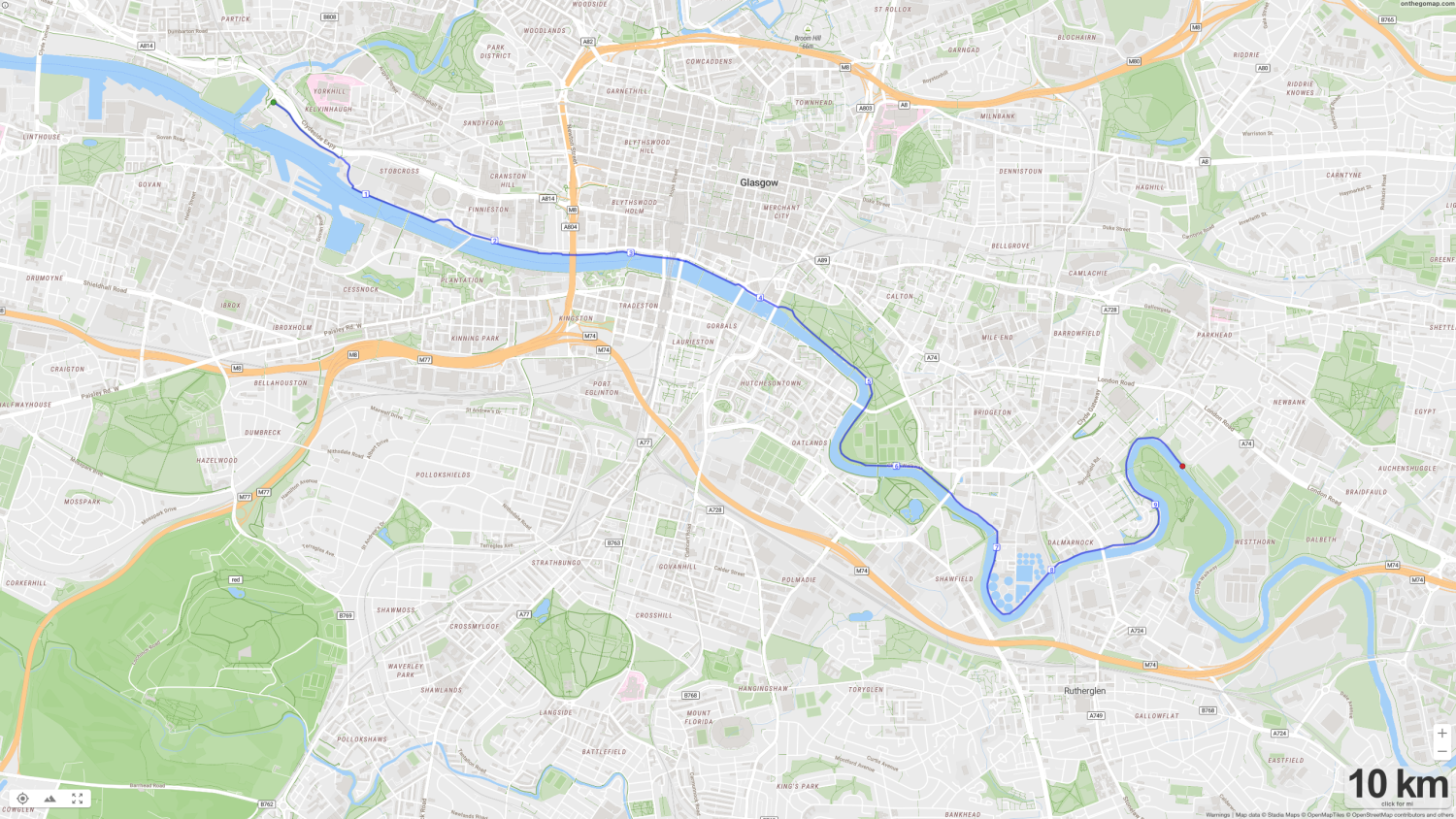 This is far from my most original route, but I'd be remiss not to mention it as it's probably one of my most frequently used due to its sheer simplicity. If you've got any way of joining the walkway along the north side of the Clyde from your area then this is a fantastic flat, straight, spacious and easy run which you can tailor to your needs as it literally goes for miles and miles and miles (I've run everything from 5km to 25km out and back). Simply join the path, start running, and turn back home when you've run half of your intended distance. 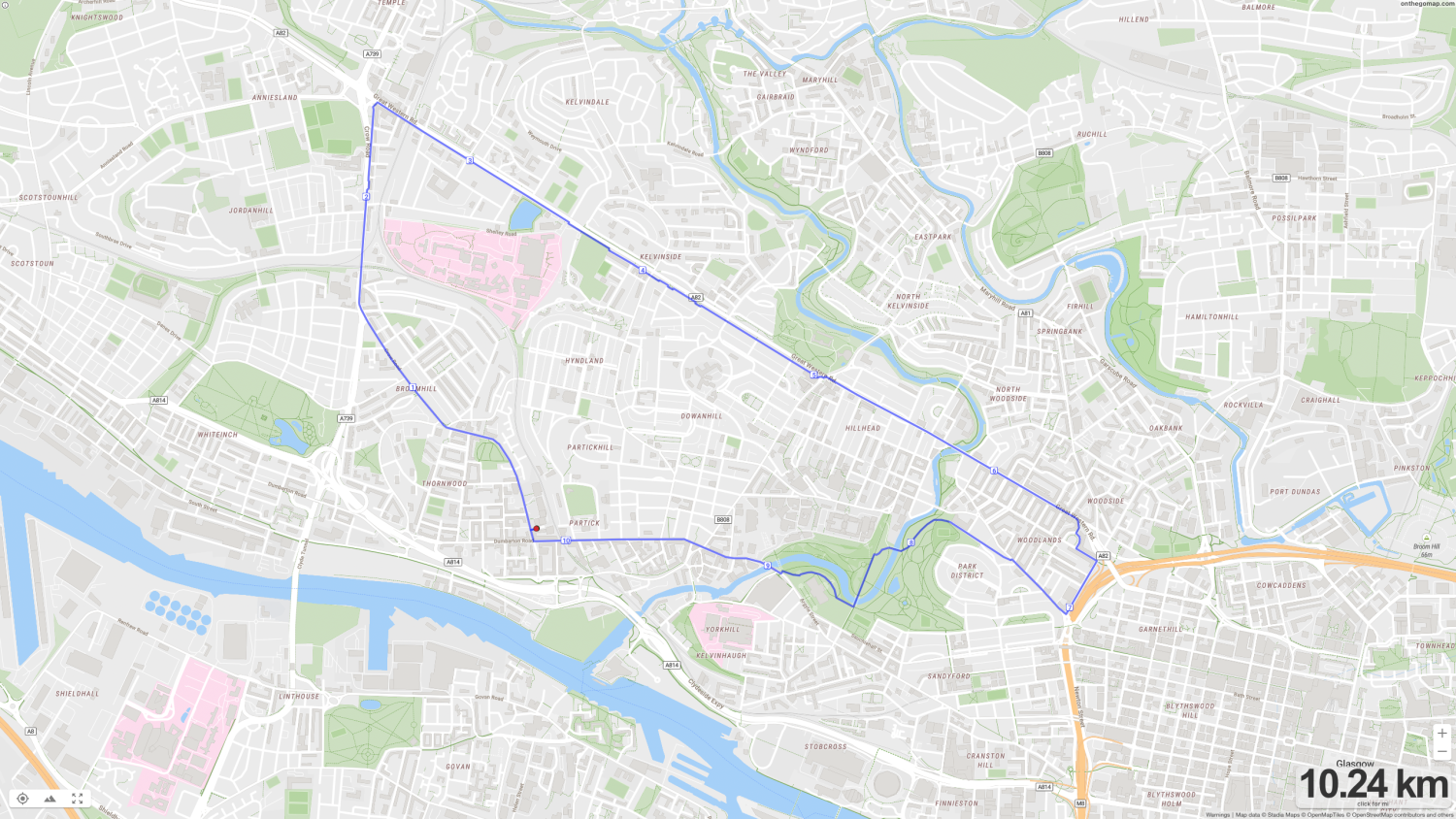 One of my absolute favourites as you really get a tour of pretty much the entire West End of the city, including a jaunt through Kelvingrove Park - I've probably run this route over 100 times in the last few years. It's reasonably flat but does have a few decent gradual inclines at points, particularly going up Crow Road towards Anniesland, and shortly afterwards heading up Great Western Road towards Dowanhill.

Surprisingly considering it's an inner-city route you'll only have to stop very infrequently for traffic - the top of Byres Road is pretty much the only place I consistently get stopped. In terms of other pedestrians the streets are mostly nice and quiet, although it can get a little busy around Kelvinbridge in particular. 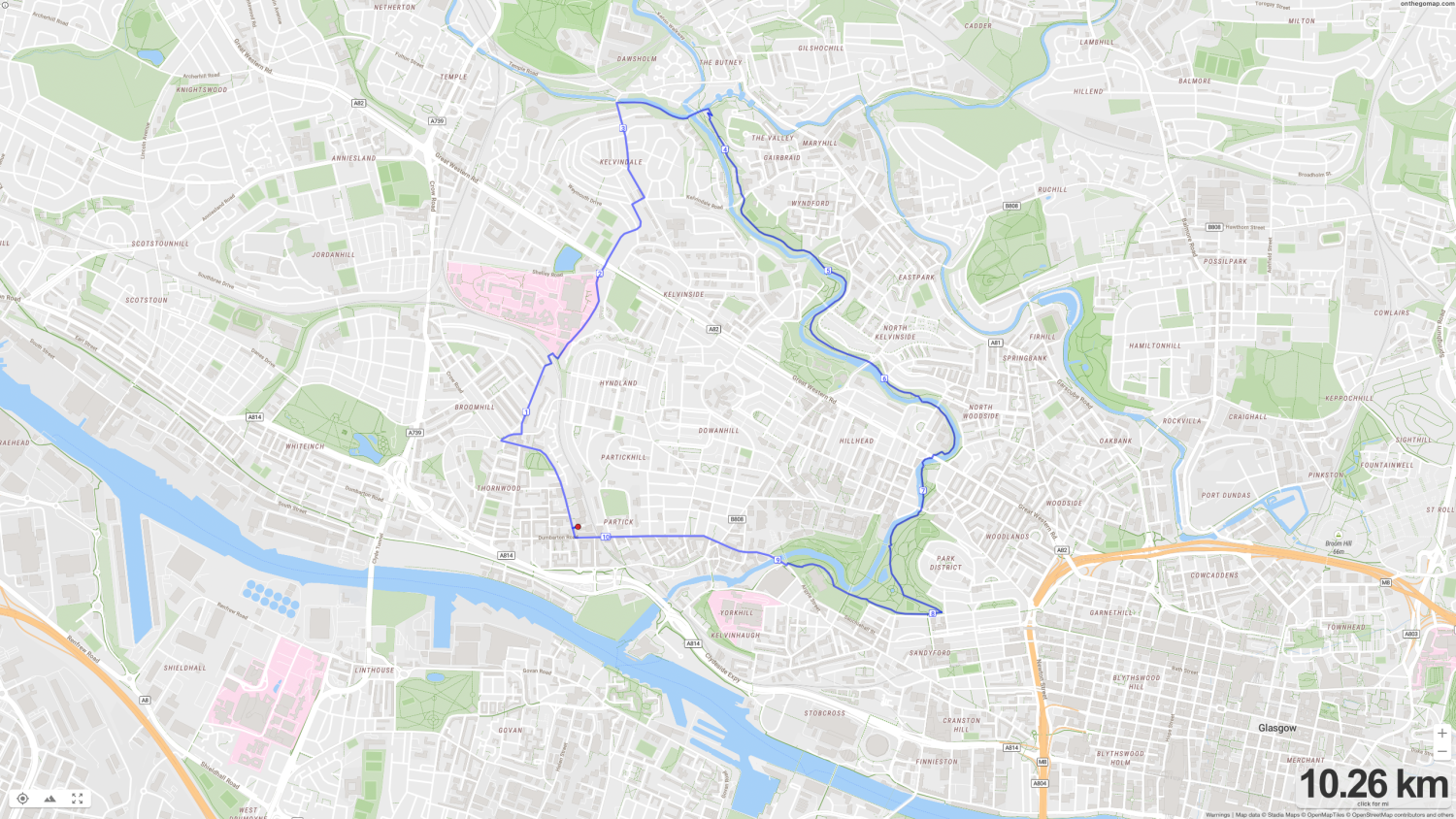 I only came up with this route more recently, but I've been really enjoying it as much of the distance is spent running along the Kelvin Walkway, which is beautiful.

It's a slightly more complex route to navigate than some of my others since it passes through Hyndland, Gartnavel Hospital and Kelvindale which requires a bit of navigation, but the other 70% of the run is very straightforward, mostly following the path of the river.

One watch-out here is that the Kelvin Walkway can get pretty busy with dogs, prams etc at peak times (weekend afternoons and the like) so I would personally avoid this route at those kind of times as the path is narrow at points. I mostly run early in the morning though when it's nice and quiet. 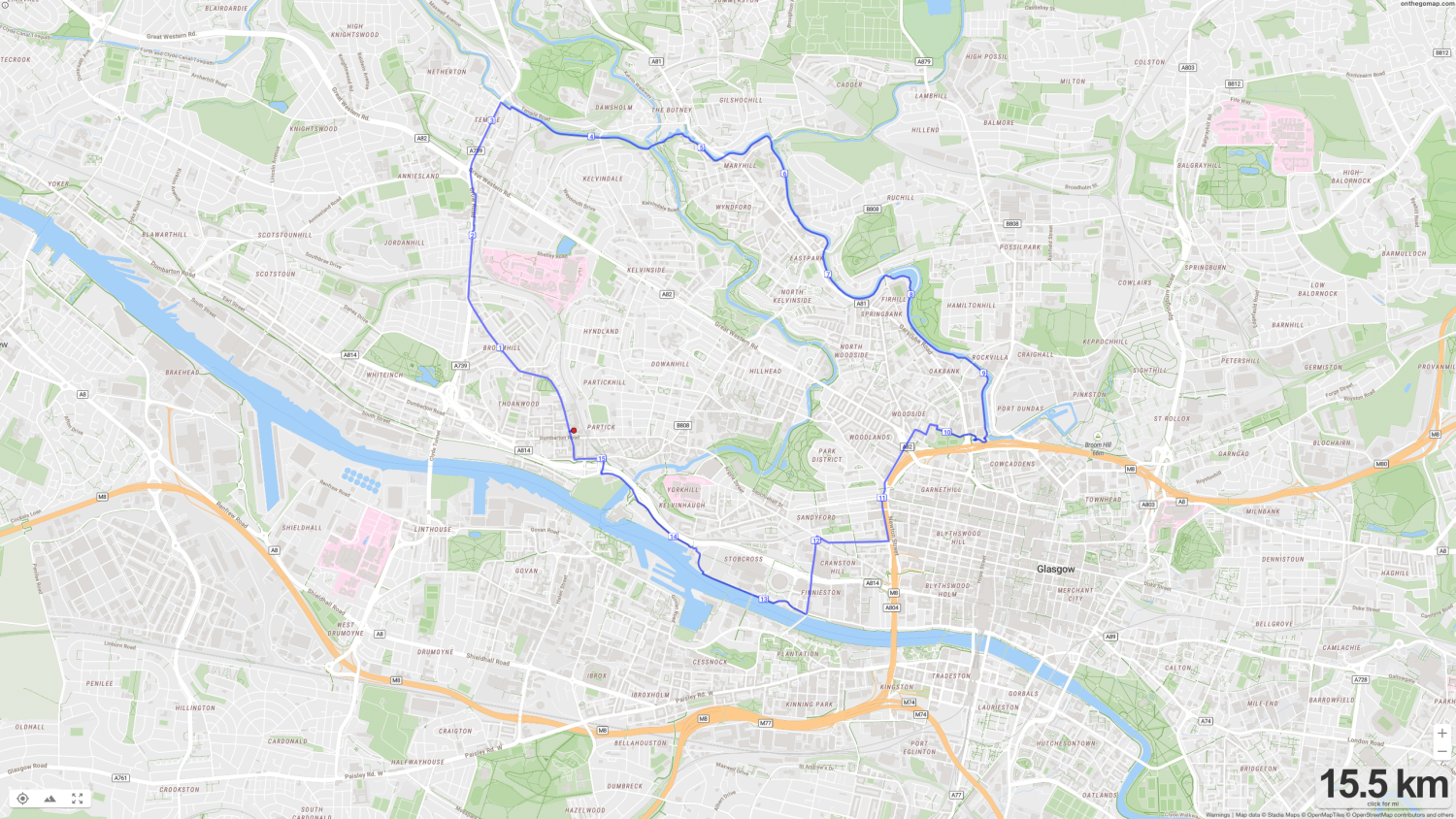 I used to live close to the canal so I've always enjoyed running along it - sadly these days I can only really incorporate it in longer runs like this since I need to run for about 3km to even get there!

If you're starting to the west (Partick, Jordanhill etc) there's a gradual incline to get up to the canal, and a much-less-gradual decline on the other end, but other than that this is a very flat route since much of it is a long the canal tow path. It's also pretty scenic, and traffic free. 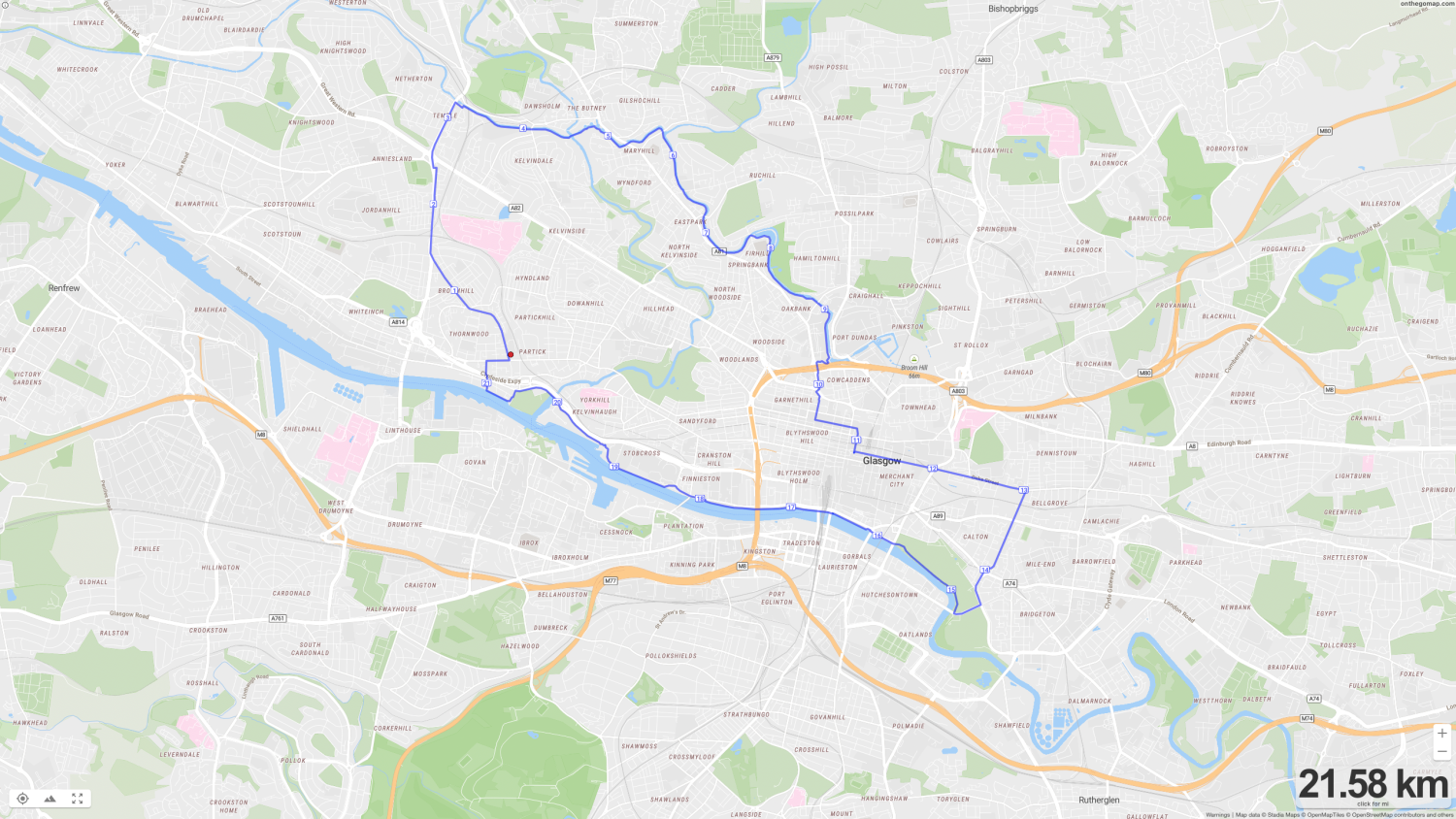 This is mostly identical to the previous route, but with the addition of a jaunt into the city centre to get the distance up to a half marathon.

Due to the length I've only done this full route maybe 3 times, but it's a really satisfying one as you really feel like you've run the length and breadth of the city. Getting home and knowing you've run from Anniesland Cross to the far end of Glasgow Green (and a whole lot more) is a fantastic feeling. 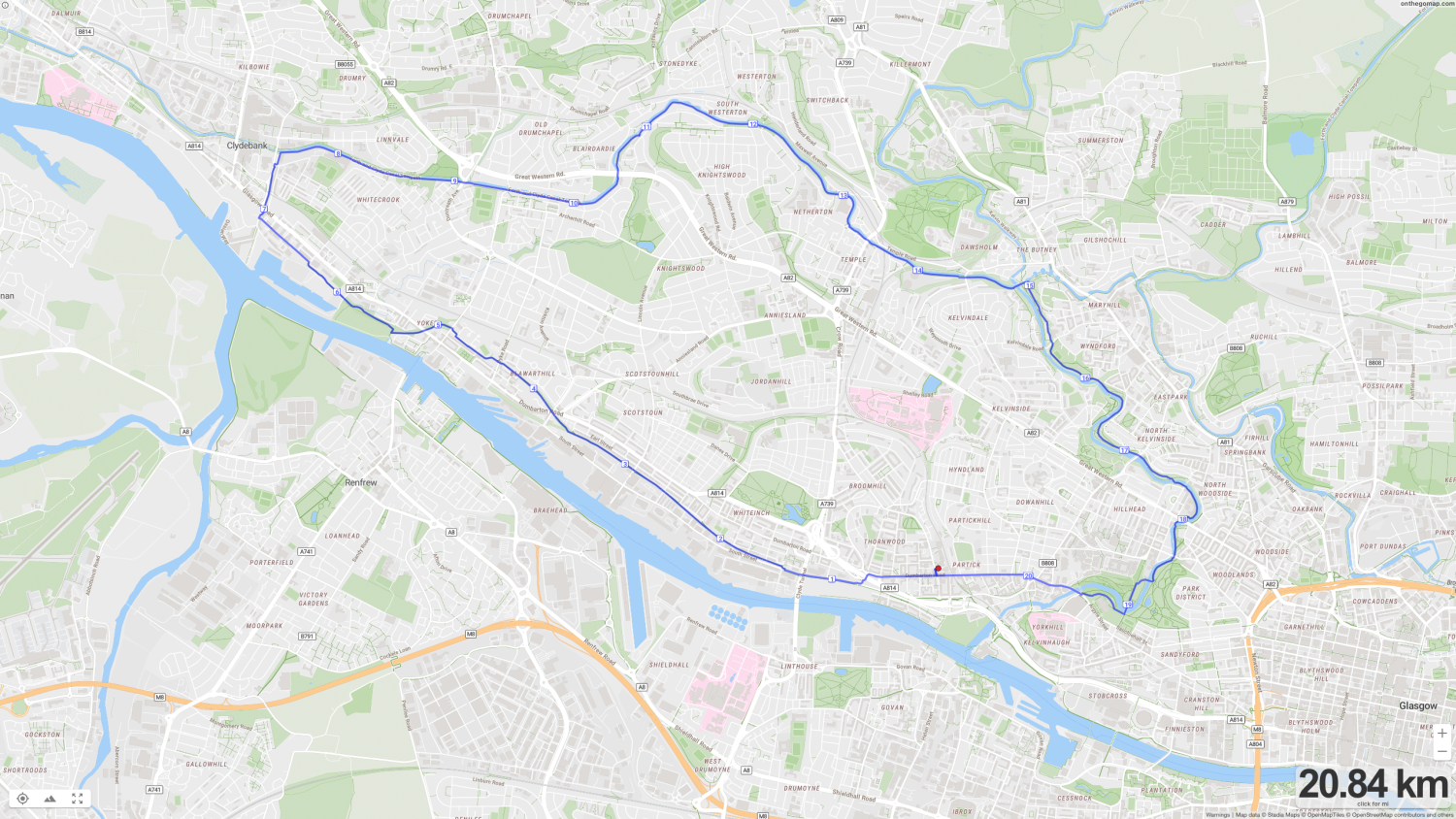 My newest route, and a new favourite considering how little time is spent anywhere near a street or a road (maybe 3km of the total 21km could be considered on-street). The key here is the National Cycle Route which leads from Partick to Clydebank and then neatly meets the Forth & Clyde Canal to bring you back into the city.

The entirety of the National Cycle Route and the canal towpath is flat, wide and extremely pedestrian friendly, making ideal to churn out a long distance like this.

Hope that was useful! If you're a runner in the area, please feel free to reach out for a chat. I'm always open to hearing about new routes.

PS - Apologies to the South Side. I know you exist, I love you, I just don't really make it down there on any of my regular routes for some reason.

A free quiz game for iOS and Android, built with React Native.